Spraycans, Brushes, Markers and T-Walls: The Graffiti of War Project

Via Graffiti of War Project courtesy of http://www.zoriah.com

Modern life conveniently keeps us desensitized and distracted when it comes to war. Beyond the watered-down version that the media shares with us, and lingering attitudes from generations past that locked war experiences away in a box, it’s no wonder we so easily turn the other way. Our growing lack of empathy towards war veterans and lack of interest in war victims isn’t justifiable. Yet adding fuel to a long faded fire is no easy task, and most people won’t blink at the passing of the 10-year anniversary of the invasion in October. Those who do notice may feel overwhelmed, disappointed and helpless… then return to worrying about paying their bills or getting home in time to make dinner, assuming they could never make a difference in the big scheme of things.

Complacency with avoidance is exactly where the problem lies. Paying attention if even for a moment does make a difference. At least according to a first hand expert, Jaeson “Doc” Parsons, who returned to the U.S. after being deployed to Iraq in 2009. Through his own experience dealing with PTSD and assimilating back into civilian life, Parsons fully believes in the willingness to listen, learn and most of all, understand. Of course an attitude adjustment doesn’t necessarily just swing open a door to conveniently packaged stories for us to digest. We might not always stop to listen, but veterans don’t eagerly spill out the things they’ve tried to forget. Enter Parsons’ project in development, “The Graffiti of War,” which presents real experiences shared through a powerful medium known as “conflict art.”

Traditional graffiti ranges as public art in the form of elaborate murals, quick phrases scrawled across surface, stenciling, or the repeated identifying tag. What has come to be known as “conflict art” painted on walls in Iraq, Afghanistan and Kuwait not only by soldiers but locals, emulates this formula. Until recently, graffiti has not been generally accepted by the mainstream art world as valuable. The unspoken value of graffiti has instead been the uncensored, temporal commentary on societal issues or declarations by an anonymous but relevant voice. A culture of graffiti has remained silently present through a decade of conflict in the Middle East as both an outlet of expression and an unconventional historical record. Given the practice of graffiti as a highly social art form, it fittingly has found a relevant place within conflict zones.

Parsons came up with the idea of collecting images of graffiti during his first deployment in 2006. He describes passing time, smoking cigarettes and discussing the art found in Porta-Pottys, which revealed sentiments he could often relate to. The book idea didn’t actually materialize until he was back in the U.S. and encouraged to find a hobby to battle PTSD. For him, simply talking about what he went through in Iraq didn’t help. Instead, finding an art form like writing kept his mind busy. Parsons describes the difficulty for male veterans especially to express themselves, often because after 6 or more deployments, shows of weakness don’t feel quite right.  The need to get rid of or give away traumatic experiences isn’t always satisfied in a counseling session. Trauma is more fully released by channeling it into the creation of a piece of art, music, or writing. The images of graffiti that Parson has collected and written about, illustrate the release of deep seeded frustrations and emotions that occurred in real time within the minds of the people living it. Continuing this process by publishing and sharing the unconventional documentation of the raw and unfiltered experience, holds potential for further release and healing. Stories are retold true to how they occurred in the moment through the ultimate time capsule, a photograph.

To compile images for the book, Parsons attempted to gather contributions through word of mouth, marketing, and partnerships with embedded organizations. Unfortunately the 100-150 submitted images per month were not enough. Anticipating the narrowing window of access to Iraq due to the approaching 2012 withdrawal, Parsons decided a return to Iraq was the next logical step. Planning, fundraising and several setbacks finally put Parsons and his team in Kuwait in June. On this trip, Parsons collected over 2600 images of T-wall art, along with growing hesitancy about the authenticity of murals as a true reflection. Much of the unauthorized graffiti had already been scrubbed clean by the military, and authorized murals contained mainly themes the military advocates: pride, hope and honor. Parsons admits that the murals don’t seem as real as they lack in reactive emotion.

Emotions are more of what Parson is looking for, particularly because they tell the truth. He recalls the art he saw in 2006– less murals, more unauthorized statements and images. The mood of the art was anti-government, worrisome. The art reflected the fear in the thick of a long war that seemed somewhat lost. In 2011– upon his return, everything felt, looked and tasted exactly the same, except it was covered in what he described as the “deafening silence of war.” In Iraq currently, there is no war, no combat, just time. The art he has found recently echoes the sentiment of wasted time, and the need to get out. Looking over all the images of graffiti chronologically from 2003 to the present, Parsons sees a clear picture of a wartime rollercoaster ride. The ups and downs shifted and flowed through the graffiti as it continued to illustrate a never-ending war.

Any good storyteller knows there are multiple sides and perspectives to consider. Parsons also collected images by locals, as this art equally told a parallel story of the past 10 years. He is grateful to have had a chance to capture images of at least eighty 40ft by 15ft murals created by local nationals in the area of Basra, where murals presented themselves as historical record of land altered and changed by Saddam Hussein. Basra was once known as the Eden or the Venice of the Middle East where a beautiful culture thrived along the canals. Saddam, eager to prove to the rest of the world that Iraq could keep up with technological advances, decided to change the routes of the rivers and canals, which in turn wiped out the entire canal community. In 2008, the changes Saddam made were dammed up and the canal culture started to re-emerge. The murals and artwork in this area relay the story of a traumatic misplacement and re-building of a culture and community. 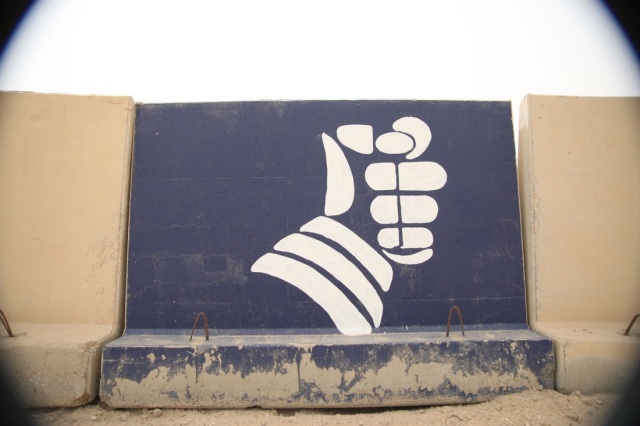 Via Graffiti of War Project

The thousands of images Parsons has collected might be enough to fill a book, but it’s not quite yet the book he wants to make. He feels that yet to be located images of Taliban art will complete the overall picture. As well, Afghanistan is so far from resolved, and the art created there currently is revealing a worsening condition. Poignant graffiti outbursts continue to warrant an audience and entice Parson as a willing narrator of a story he is too familiar with to turn away from. As well, he is committed to accurately presenting a story that can so easily be twisted. How we remember and understand this war as a part of our history is up to the records that are kept. Art has always been a complex and revealing window into the past.

For now, and as plans develop for another visit to the Middle East, the book is on hold. In the meantime, The Graffiti of War project will start an exhibition gallery tour across the U.S. to help raise awareness as well as attract a publisher.

This entry was posted in Uncategorized and tagged conflict art, the graffiti of war project, Tricia Khutoretsky. Bookmark the permalink.

1 Response to Spraycans, Brushes, Markers and T-Walls: The Graffiti of War Project