Posted on September 14, 2011 by 10yearsandcounting

Stanley Breen is a high school blogger for 10YAC from Southwest High School in Minneapolis, MN who is featured on Mike’s High School News. 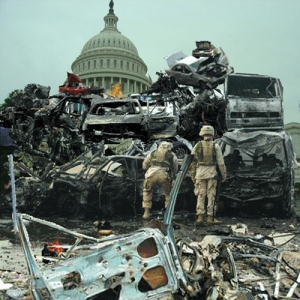 Since the beginning of time, art has been used to express thoughts on war. From cave paintings to modern day street art, war has been a large topic.

Today, one of the foremost street artists is the elusive Banksy, who makes quirky and clever war art in a most creative way. One of his works that stands out to me is an image of kids running around in a circle; in the center of the circle is a large mushroom cloud of smoke.

This powerful piece of work really moves me. It shows how war forces its way into the lives of young people. The mushroom cloud represents death and destruction. Kids are forced to adapt their lives to it. It makes me wonder, how does experiencing war as a child affect that person as an adult? I think that kids are affected the most by war. Children are not capable of taking care of themselves.  Because of this, they are more vulnerable. When a family member dies, it can affect a child in a very different way than it does an adult. This can be even more damaging if that death is caused by war.

The only statistics we hear from the war are numbers of U.S. troops wounded and killed in action. We don’t track civilian casualties. Why don’t we have a statistic for families who have lost a family member?  Why don’t we have a number for how many children will not go to school because of war?  When a war begins, people are mainly focused on the objective, the goal of the war.  If we, as a nation, spent more time considering the lasting impacts of war, we might make different decisions about going to war.

It’s no surprise that many people who experience war create art that is very powerful and moving. For those of us who have never been in a war, it can be extremely difficult to imagine what that experience is like.  That’s why art is so important. Art can communicate the experience like nothing else can.  A great example of this is a digital image by Sam Durant.  In this piece, Durant shows what war might look like if it was in Washington D.C.  It’s an interesting juxtaposition between the people who have the power to enable destruction and the destruction itself.

It can be hard to know where and how to get involved in political activism. Art is a great starting point. You don’t have to be a professional artist to make art, and you shouldn’t feel intimidated if you have never done it before. If making art isn’t your thing, enjoying and seeing art made by others is equally important. Being an observer and appreciator of art is as essential as creating it. 10 Years and Counting is an organization that is focused on bringing attention to the cost of war through art. 10 YAC is a great way to get involved.  Check out the web-site: the galleries, the toolkits and the blog. There is a lot of inspiration there.  Find out how you can get involved.